WHAT THE NESA SAYS:

This module requires students to engage with and develop an informed personal understanding of their prescribed text. Through critical analysis and evaluation of its language, content and construction, students will develop an appreciation of the textual integrity of their prescribed text. They refine their own understanding and interpretations of the prescribed text and critically consider these in the light of the perspectives of others. Students explore how context influences their own and others’ responses to the text and how the text has been received and valued.

The poems set for study are The Love Song of J. Alfred Prufrock, Preludes, Rhapsody on a Windy Night, The Hollow Men and The Journey of the Magi.

The Module B rubric explained

Modernism is a literary and cultural international movement which flourished in the first decades of the 20th century. Modernism is not a term to which a single meaning can be ascribed. It may be applied both to the content and to the form of a work, or to either in isolation. It reflects a sense of cultural crisis which was both exciting and disquieting, in that it opened up a whole new vista of human possibilities at the same time as putting into question any previously accepted means of grounding and evaluating new ideas. Modernism is marked by experimentation, particularly manipulation of form, and by the realisation that knowledge is not absolute.

It is through his vivid imagery of the new urban landscape that Eliot’s work captures alienation.

To what extent does this statement relate to your own understanding of your prescribed text? In your response, refer to the quotation and your two of the prescribed poems.

To what extent do the poems you have studied present a view of existence that is ultimately bleak and futile?

In your response, refer to The Love Song of J. Alfred Prufrock and one other poem.

‘It is through its detailed illustration of human life that poetry becomes memorable.’

Discuss this statement in relation to the poems you have studied.

The poetry foundation and T.S Eliot

Thomas Stearns Eliot’s speech at the Nobel Banquet at the City Hall in Stockholm, December 10, 1948 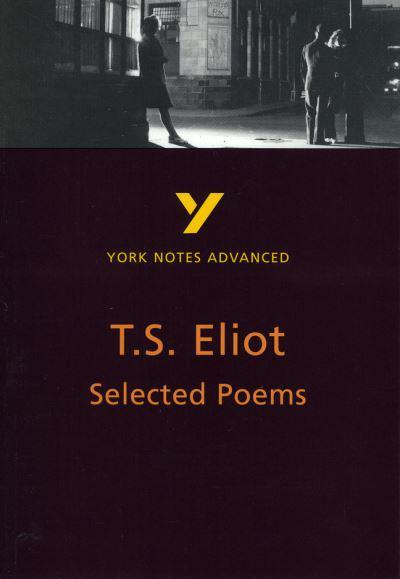